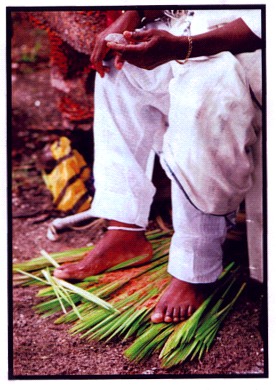 “After their horrific ‘Middle Passage,’ over 40 percent of the African slaves reaching the British colonies before the American Revolution passed through South Carolina. Almost all of these slaves entered the Charleston port, being briefly quarantined on Sullivan’s Island, before being sold in Charleston’s slave markets.”

The lgbo Nation Worldwide cordially invites you to its Second Igbo Landing Dedication and Conference in Charleston, South Carolina. The ceremony will take place October 11-12, 2003, at Sheraton North

The ceremony is being organized and hosted by Ekwe Nche Organization, with the assistance of sister Igbo organizations in Canada, Nigeria, and the United States, including Africa Connect based in Philadelphia, Pennsylvania; and Cultural Education Institute, based in Teaneck, New Jersey.

Igbo landing commemorations are multi-purpose ceremonies that simultaneously honor the freedom-fighting struggles of our ancestors (who drowned themselves after disembarking from their ships in the New World rather than be slaves), promote closure and healing from the pains of the trans-Atlantic slave trade, and strengthen the blood and other cultural ties between ancestral Igbos and their brothers and sisters in the global diaspora. South Carolina is chosen for sanctification this year as an Igbo landing site because of its acquired reputation as an “Ellis Island” for African American “migration” to the United States, given the massive amount of slaves, estimated at “over 40 percent” that passed through the State. Information we received in the course of our research for this conference reveals that “almost all of’ the slaves who entered the Charleston port, were “briefly quarantined on Suffivan’s Island, before being sold in Charleston’s slave markets.”

Individuals and organizations attending the ceremony are advised to lodge at the Sheraton Northern Charleston Hotel, where we have secured a special group rate of $99 a night (Single/Double), plus tax, that they can take advantage of if they book their accommodations 30 days before the date of the conference. Contact information for the hotel are as follows: Phone: (843) 747-1882; and Fax (843) 747-1895. The hotel also has a website accessible at www.sheratonnorthcbarleston.com. Individuals and organizations seeking to send congratulatory or solidarity messages to Ekwe Nche Organization and/or the Igbo Nation Worldwide or simply to advertise their products may buy space in a booklet of program of the events for the conference that we are preparing. The following donations apply: $300/back inside page; $100/full page, inside pages; and $75/half page, inside pages. Further information relating to the conference, including updates, will be released as those information become available.

Send your comments, adverts and donations to:

This message has been processed by Firetrust Benign.